Given the contrast between North America’s stable economy and the rollercoaster markets in regions like Russia, Brazil, and China, a supplier might be forgiven for staying close to home.
Alas, that’s not an option these days. Virtually every major automaker has developed global platforms for its product lineup, and suppliers are expected to support these programs.
With that in mind, how should a manufacturer build factories in a new region without undue risk? The auto industry’s suppliers have been wrestling with this problem for the past 20 years.
According to a just-released survey of suppliers we conducted with the OESA, 80 percent of the respondents reported that their plant startup had gone well, but only half reached their financial breakeven point after two years.
Survey participants had global revenues ranging from $50 million to $900 million, and more than half had opened two or more plants over the past decade.
Seventy-seven percent of survey respondents used a three- to five-year financial planning horizon, and annual plant revenues ranged up to $75 million.
Companies generally named a plant manager at least seven months before launch. Fifty-five percent of those companies chose an expatriate as the top onsite manager, while the remainder hired a local manager.
Corporate CEOs closely monitored their startups, visiting the new plants on a quarterly basis for the first five years of operation. But finding and retaining managers was a major challenge. In the first three years of a plant’s operation, management turnover usually ranged from 25 to 50 percent.
With the survey results in mind, suppliers looking to expand into a new geographic market should take these key actions:
Our survey offers a look at the challenges that new plants in emerging markets pose for mid-sized suppliers. After the survey was completed, we also interviewed executives of three mega-suppliers — Johnson Controls Inc., Mahle GmbH and International Automotive Components Inc. — to gain additional perspective.
These companies were chosen because they’ve made big investments in three top emerging markets: China, India, and Mexico.

A supplier’s guide to China could plausibly be written by Johnson Controls, which produces 43 percent of all seats in that market.
In April, the company confirmed plans to open six new plants in China over the next two years to produce seats and interior components, bringing its total in that market to 72 factories.
Despite stagnant vehicle sales in recent months, China remains the auto industry’s key growth market over the long term. Johnson Controls’ recent announcement of plans to spin off its seats-and-interiors division will not affect that division’s long-term expansion plans in China.
In China, the first make-or-break decision is whether to form a joint venture, said Byron Foster, global group vice president of Johnson Controls’ seating division.
When the company entered China 20 years ago, it counted on local partners to provide executive talent, gain access to key government officials, and meet potential customers.
“We provided the technology and manufacturing know-how, and they brought [access to] the market,” Foster said.
To provide management expertise, Johnson Controls formed a SWAT team of experts dubbed the China Service Center. Initially, this group was staffed with expatriates as well as local talent, with a core group of 10 senior executives who could draw on decades of experience in North America and Europe.
A JCI expatriate typically served stints of two to three years, although some veterans stayed in China up to five years. However, Johnson Controls puts a high priority on training local executives recruited from their joint-venture partners.
After a new plant opened, the expatriate team typically moved on after six to 12 months, leaving locals in charge. “We had to find talent and cultivate it,” Foster said. “We would nurture that talent and teach them the JCI way.”
After awhile, a factory’s Chinese managers would be given temporary assignments in North America or Europe. This accomplished three things: They would develop useful contacts, absorb JCI’s corporate philosophy, and burnish their resumes for future promotions.
“What we found is that in regions like China, they would execute our standards to the letter of the law — even more so than we would in North America and Europe,” Foster said.
Johnson Controls has come full circle in China. The China service center is staffed mostly by Chinese nationals, and the company has a deep bench of experienced managers.
And now, a joint venture partner is positioned to run JCI’s global interior trim division, a network of 90 plants, R&D centers and offices. Last year, Johnson Controls announced plans to spin off its interiors unit — which produces instrument panels, door panels, and consoles — into a partnership with Yanfeng Automotive Trim Systems Co.
While Yanfeng holds a 70 percent stake in the $8.5 billion venture, JCI’s customers aren’t likely to notice big changes. Yanfeng can draw upon global expertise cultivated by its former partner, Visteon. And the chief of JCI’s global seat operation, Beda Bolzenius, is managing the transition.

When Mahle GmbH opens a new plant overseas, the company prefers to run it with locals — not expatriates. That’s a tried-and-true plan for countries where the German supplier has an established presence, but how does Mahle find management talent in new regions?
In the case of Mexico, Mahle borrowed talent from Behr GmbH, a company that it had acquired in 2013. Behr, a major producer of HVAC and engine cooling systems, had a plant in Ramos Arizpe, Mexico.
Business was strong, and Mahle opened a new HVAC plant next door in June. The new facility has 150 employees, with plans to expand to 500 workers by 2018. To run it, Mahle transferred supervisors from the old Behr plant, which continued to operate with a team of newly hired managers.
“It is convenient that you don’t have to build from scratch in a new country,” said Wilm Uhlenbecker, president of Mahle Behr USA. “When the acquisitions were made, the managers came with the business.”
Mahle began assembling key staffers for the $59 million plant about six months ago, Uhlenbecker said. To supplement its management team, Mahle hired an outside engineer and a tooling specialist — both Mexican — to oversee the injection molding machines.
The company also brought in one expatriate — a financial controller — to help launch the plant. He was later replaced by a Mexican.
Uhlenbecker says turnover hasn’t been a big problem in Mahle’s Mexican facilities. In part, that’s because suppliers in the region have an informal agreement not to poach talent from their competitors.
In startup mode, the new plant is running at 10 percent of capacity. Uhlenbecker expects production to rise to 60 or 70 percent in two years or so, when he expects the plant will hit the break-even point.
Although it’s a significant investment, Uhlenbecker says the project is not financially risky. The company can expand the capacity of its assembly lines and injection molds on a step-by-step basis.
That’s not possible with its biggest investment, a brazing furnace. However, that furnace should be operating at 80 to 90 percent of capacity within two or three years, Uhlenbecker noted.
Given its proximity to the United States and its integration into North America’s manufacturing network, Mexico doesn’t present the cultural hurdles one might encounter in other emerging markets.
“In Mexico, it’s not as difficult to establish your own plant as in China or India,” Uhlenbecker said. “I would recommend a wholly-owned facility if you can do it.”

As far as Gajanan Gandhe is concerned, one of the key executives at any new overseas plant is the personnel director.
In a market like India, your top priority should be to form your team of plant managers, engineers, and workers as soon as possible, according to Gandhe, the vice president of IAC’s operations in India, Southeast Asia, and South Africa.
When IAC entered the Asian market in 2008, the company won a contract to supply glove boxes to Volkswagen in India.
Since he was on a tight timetable, Gandhe’s team rented a building in Pune so that they could start training their personnel immediately. “It’s a good way to get things started. You want to recruit people, train them, and expose them to new technologies. You don’t want to wait.”
On the production side, IAC kept it simple. The Pune plant started with a basic product, glove boxes, and started up in six months.
In China, IAC took a similar approach for several projects, while in other markets, the company started out in plants owned by its joint-venture partners.
This strategy — borrow or rent a plant, train your work force, and build your own facility later — works well for IAC, Gandhe said. “That’s our typical modus operandi,” he said.
Once a plant is operational, IAC maintains its focus on personnel development. It isn’t enough to pay high salaries; you have to give them a career path, too. Gandhe says he learned his lesson after a couple of well-paid experts left IAC.
“They were not fully challenged every day,” Gandhe recalls. “They got impatient. After a few months, they thought maybe they could get a job where they were busy every day.”
Visteon’s Wood shares Gandhe’s emphasis on personnel development. Visteon likes to hire young college graduates, then rotate the most promising employees through three or four departments.
That gives the new hires a good look at the company — and their career path — while allowing Visteon to find the best fit for their talents. Says Wood: “The most important thing is the skills of your people.”

For automotive suppliers, the three hottest emerging markets are China, India and Mexico. Here’s a forecast: 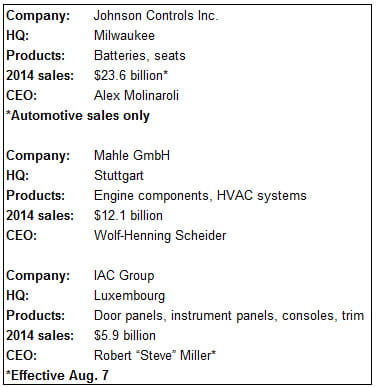 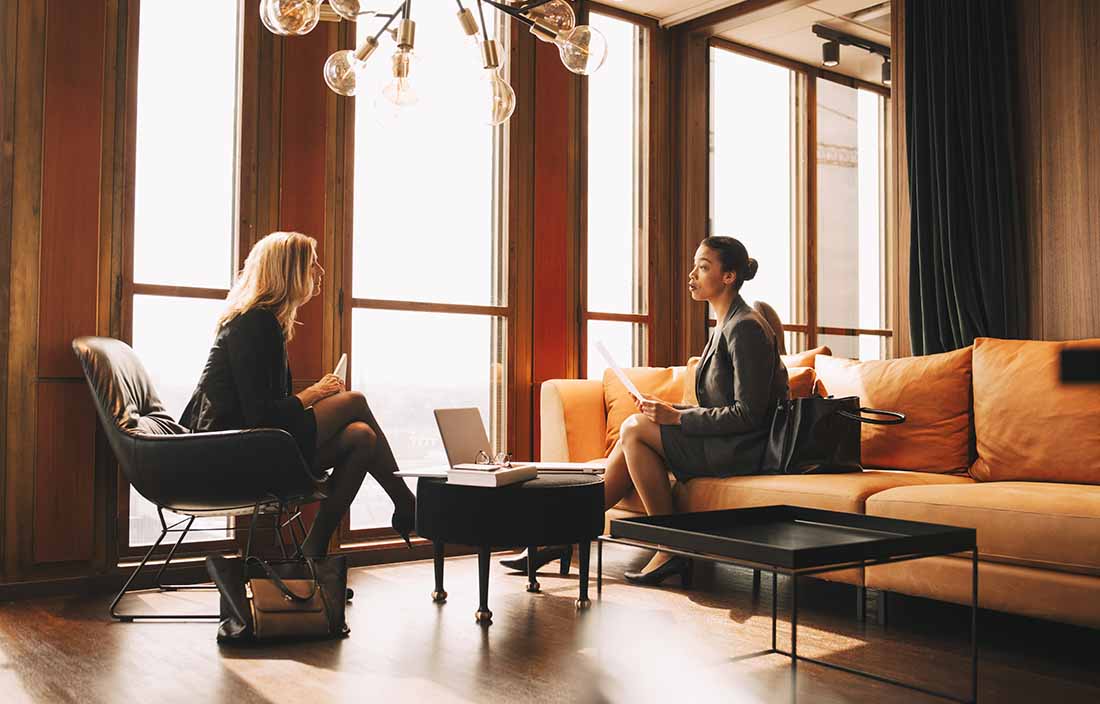 China-Taiwan tensions: What are the risks?