Should the length of the current expansion be a concern?

Jim Baird Wealth Management
Blog 1 min read
While the current U.S. expansion is one of the longest in recent history, there appears to still be more room for growth to continue. 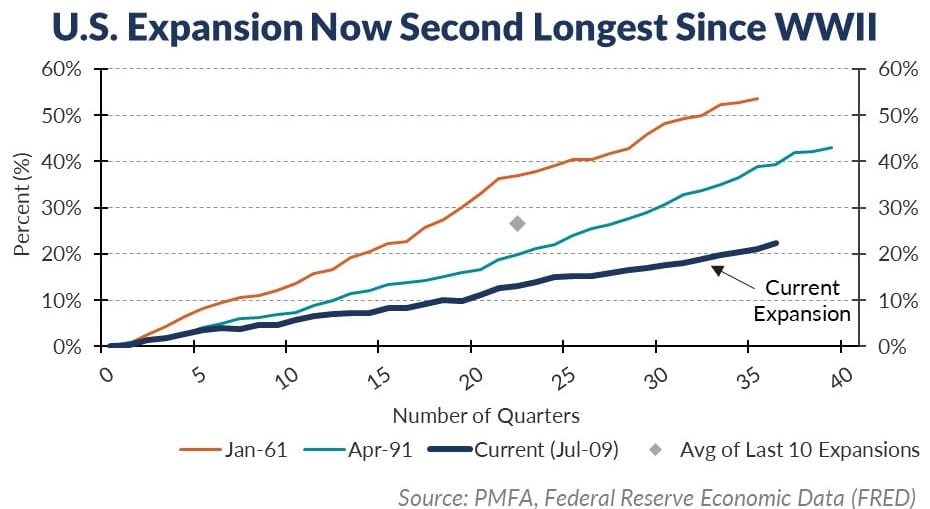 As of June 30, the current expansion reached nine years and is now the second longest of the ten post-World War II expansions, lagging only the 1991 – 2001 expansion. But there is more than one way to measure an expansion. Despite its longevity, it remains below average from a cumulative growth perspective at just over 22%, compared with an average of 27% over that period, which was achieved (on average) over a much shorter timeframe. (The average expansion of that era lasted about 5 ½ years.)

As discussed in our accompanying comments on Fed policy, the central bank would normally have hiked rates further and faster than it has in the current cycle, creating much tighter financial conditions earlier in prior expansionary cycles than exist today. Fed policy may be tightening, but short-term rates are still well below the Fed’s neutral target, and are actually still negative on an inflation-adjusted basis.

The current expansion may be atypical, but every cycle is distinct and different. Of course, a variety of factors beyond the economy influence capital market returns. Equity bull markets may be interrupted by volatility, but tend to continue until the onset of a recession brought about by an overtightening of financial conditions, neither appears to be imminent.

Plante Moran Financial Advisors (PMFA) publishes this update to convey general information about market conditions and not for the purpose of providing investment advice. You should consult a representative from PMFA for investment advice regarding your own situation. The information provided is based on information believed to be reliable at the time it was issued. Any analysis non-factual in nature constitutes only current opinions, which are subject to change.
Jim Baird, Wealth Management